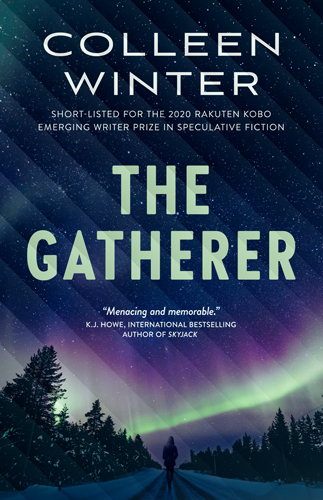 “This near-future sf thriller illuminates tipping points in ecological power and scientific pursuit. An action-packed plot, with well-rounded characters and an intriguing premise make it recommended for all collections.” – Library Journal

“[An] eloquently written dystopian debut… Winter’s well-rounded characters and obvious potential will have readers tuning in for the next installment.”- Publishers Weekly

“The Gatherer by Colleen Winter is my favorite kind of Crichton-esque thriller: smart, compelling, and beautifully written; a fascinating story in which a talented scientist has to save the world from the Frankenstein monster she herself created before falling victim to the power she has inadvertently unleashed. Convincingly realistic and endlessly surprising, readers won’t be able to stop turning the pages!” – Karen Dionne, #1 internationally bestselling author of The Marsh King’s Daughter

It’s been three years since Storm Freeman released the Gatherer, a device that brought free, infinite energy to the world. The initial reverence has receded from the world changing invention as people are afflicted with a strange, inexplicable disease.

Afflicted herself, Freeman has retreated to the Yukon, to hide out from the world. When Maria Kowalski arrives, the woman who first tried to stop her from releasing the Gatherer, Storm has to make a choice: stay hidden or return to the world and destroy what she created.